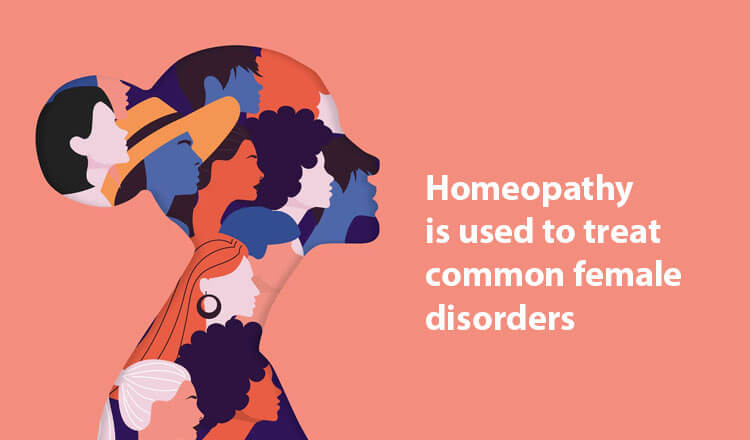 Women encounter distinct health issues. Their systems are driven via rhythmical menstrual cycles that occur with precise accuracy. However, that is not unusual for modest hormonal, emotional, environmental, and nutritional elements to disrupt this rhythmical equilibrium. Natural homoeopathic medicines can assist restore equilibrium in this situation, safely and tenderly.

Homeopathy addresses women’s health difficulties from a female viewpoint not because homeopathy promotes mind/body therapy, but also because it sensitively understands their subtle emotions. Women may have a higher emotional threshold than males, but several men would disagree. Homeopathy recognises this factor as well and includes it into the selection of the appropriate remedy for a certain ailment.

Being a young woman comes with its own range of physical difficulties. The difficulties that women experience differ due to their biological or physical characteristics. Women account for 2 out of every 3 thyroid dysfunction patients.

The men to women migraine sufferer ratio are similarly 3:1. Women have been disproportionately affected by these and many other illnesses. There is still an incredibly complex gynecological system to consider. This carries with it its specific set of disorders such as dysmenorrhea, tumors, fibroids, and menstrual issues.

Considering that the female’s physiology is highly distinct and complicated, with many organs operating in close synchronisation with one another, evaluate how homoeopathy, which normally strives to reach the base of following common female disorders issues and fix the entire system as a whole, works.

PCOS, like obesity as well as kind 2 diabetes, does have a significant hereditary propensity. Multiple tumors around female ovaries are common, as are irregular periods, an increase in testosterone, plus reproductive difficulties. Pulsatilla, Apis Melllfica, Lachesis, Graphites, as well as Sepia are widely utilised during homoeopathy depending on the symptoms of the patient.

What has to be realised is that irregular menstruation is a sign of an existing ailment, and a thorough history and physical examination (especially ultrasound scanning) seem to be necessary to determine the cause. Some common medicines used to treat irregular menstruation include Natrum Muriaticum, Pulsatilla, Sepia, Senecio Aureus, Cimicifuga, Staphysagria, Euphrasia, as well as Magnesium Carbonicum.

Many women connect menstruation with discomfort in the belly, hips, as well as thighs. However, because it is physiological, this should ultimately be a simple procedure. This is also accompanied with severe cramps, diarrhoea, and discomfort that is alleviated by warmth in certain women. Pulsatilla, Belladonna, Nux Vomica, Mag Phos plus Cimicifuga seem to be some of the most often utilised drugs to assist women rest and lessen discomfort.

Similarly, as with irregular menstruation, there is indeed a substantial contributing factor to infertility that must be recognised and treated. Considering the problem’s social aspect, there seems to be a significant psychological element, and the pair should participate in a deep mental as well as bodily constitutional debate to get at a personalised routine. Calcarea Carb, Aletris Farinosa, Borax, Natrum Phos, Sepia, Pulsatilla, Agnus Castus, Natrum Carb, Sabal, and Conium are herbs used to treat infertility.

As previously said, hypothyroidism is particularly frequent among women. There seems to be a substantial association between thyroid chemical levels and infertility, recurring miscarriages, irregular menstruation, and other symptoms. Some of the most widely utilised homeopathic medicines for hypothyroid women include Sepia Officinalis, Calcarea Carbonica, Nux Vomica, Lycopodium clavatum, as well as Graphites.

Migraine is one of the other common female disorders issue that mostly affects women and is strongly linked to menstrual cycles and chemicals. Commonly used herbs include Natrum Mur, Belladonna, Sanguinaria, Spigelia, as well as Glonoine.

Some more problems treated by Homeopathy

Many examples are provided in the following categories:

Homeopathic treatments are 100% safe and have no adverse effects. As a result, they may be safely used during pregnancy, while other forms of medications cannot be easily provided. Furthermore, whenever the woman is handled homeopathically throughout pregnancy, the unborn is also benefited. Because the therapy is constitutional rather than symptomatic, both mom and baby would be healthier, resulting in a more comfortable pregnancy and birth.

In comparison to Hormone treatment that has been linked to a variety of adverse effects spanning from vomiting and bulging veins to seizures and malignancies homoeopathy provides a secure and efficient answer to the painful feelings of menopause.

Must read: Treat Sciatica with Homeopathy

These are the common female disorders and homoeopathy provides more comprehensive treatment with fewer adverse effects for some prevalent medical disorders, particularly in women. The system may take some time to react to this, but it is absolutely recommended. Self-medication should be avoided because each woman seems different. You can see a homeopath if you want to discuss any specific topic.