Autism between different age group, how can homeopathy help?

Autism between different age group, how can homeopathy help?

Autism Spectrum Disorder (ASD) is indeed a complicated developmental disorder characterised by persistent impairments in social involvement, speech, especially nonverbal expression, as well as repetitive behavioural tendencies. This is a chronic illness that is generally identified in childhood. Yet, the intensity of ASD signs differs from individual to individual. Autism therapy in homoeopathy is another of the highly effective and established method for treating persons of all ages who suffer from this illness.

When a baby is not cooing, smiling, or expressing joyous movements by six months of birth, this is an initial symptom of Autism.

Autistic children have little or zero eye contact, create no sounds, and therefore do not nod and smile towards their family members by the time of nine months.

A Twelve-month-old child with Autism may not even be capable to talk, point out objects, wave back, or reply to own names.

One year old child with Autism Spectrum Disorder may not show love, dislike being caressed, be afraid of new persons, talk almost nothing, be unable to begin conversations, and fail to look for assistance.

Must read: Back Pain and Homeopathic Approach

By this time, an autistic kid may be unable to walk correctly, may exhibit repetitive gestures such as flapping fingers, and might even be offended by specific tastes, aromas, and noises.

By this time, children having ASD may exhibit limited speech, dislike playing with strangers, prefer their private company, and have a strong interest in particular things.

Autistic children might not be capable to respond to questions effectively at this age as well as may exhibit severe behaviours such as anger, shyness, or sorrow. 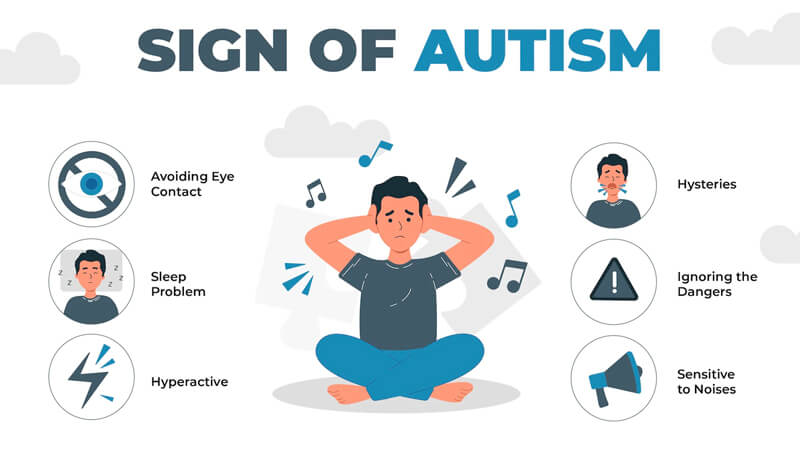 Individuals with Autism Spectrum Disorder are sometimes detected during adulthood. Adults with ASD may exhibit the following classic symptoms:

Many Autistic Adults have been extremely gifted and can achieve great success within their chosen careers.

The actual aetiology of ASD is uncertain, although the following variables are suspected:

Autistic kids should preferably be handled with homoeopathy for the three reasons listed below:

Homeopathy is effective in treating the autistic kid’s hypersensitive condition. It aids in the development of their acute motor abilities and also their perceptual issues.

Must read: Treat Sciatica with Homeopathy

Another advantage of homoeopathy is that doctors treat the entire individual, not just the symptoms. Consider a youngster who has a verbal delay, hypersensitivity, gastrointestinal issues such as persistent constipation as well as incontinence, and poor social interaction. A traditional doctor, or maybe even any holistic or alternative doctor, would have to deal with one of these issues independently. Not the case with homoeopathy.

Every one of these problems can be addressed by a single homoeopathic treatment. Of course, every parent does have the option of incorporating other treatments, such as adopting casein as well as gluten-free regimen, nutritional supplementation, occupational treatment, sensory integrating treatments, and numerous different therapies shown to be beneficial. However, after the appropriate homoeopathic medicine has been administered, these could be rendered obsolete.

Third, these youngsters might be extremely delicate to taste as well as scent. Homeopathic medications are sweet, and children frequently ask for more. They might not have to be provided on a regular basis—in some situations, maybe once every couple months. Lastly, homoeopathy is the healthiest sort of medication available. Families who are concerned about the safety of vaccines and other treatments should rest assured because homoeopathy is completely natural.