Homoeopathy: A Holistic Solution For Fibroids

Homoeopathy: A Holistic Solution For Fibroids 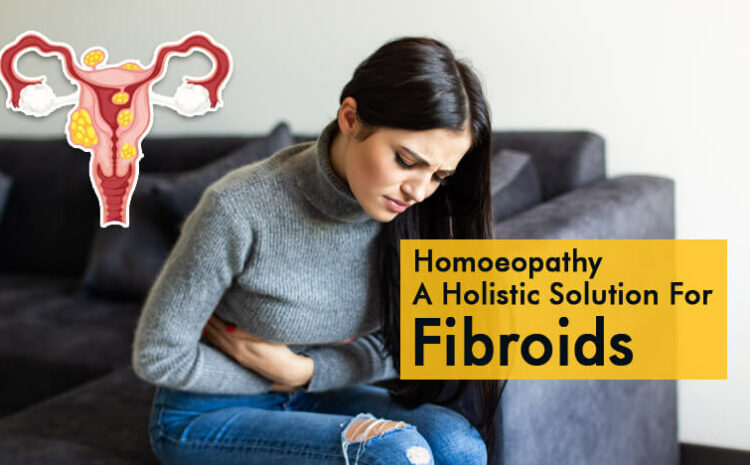 Homoeopathy is the oldest system of alternative medicine. It was first introduced in 1796 by Samuel Hahnemann. The popularity of homoeopathy as an alternative system of medicine increased in the 19th century. Homoeopathy has been much under scrutiny in the 21st century. Scientists and researchers claim that the therapeutic benefits of homoeopathy have no strong scientific justification or proof. Despite such claims, a considerable share of the global population believes homoeopathy to be effective in treating health issues. The market for homoeopathy treatment is quite larger than estimated.

From mild to high-grade diseases, homoeopathy treatment is available. Fibroids are one such thing that can be treated effectively by the use of homoeopathic remedies. It may not cure an individual completely but it can improve the overall condition.

Fibroids are common in women, especially those in their prime age of reproducing. Fibroids or uterine fibroids are benign growths in the uterus. They are smooth muscle tumours that rarely become cancerous. Such benign uterine tumours are also called leiomyoma. Most women hardly show any symptoms but in some cases, women may feel extreme pain and menstruate heavily for an extended time.

Fibroids vary in shape and size. They may be as tiny as a seedling, hardly visible to the naked eye or they may be bulky, larger pushing on the bladder and distorting the shape of the uterus. Women with bigger fibroids may have the urge to urinate frequently. Uterine fibroids may be single or multiple. In exceptional cases, multiple fibroids can enlarge and add to the weight. It may grow big enough to touch the rib cage. This is when affected individuals need to undergo surgery. Homoeopathy, as an alternative, can prevent fibroids from getting aggravated to some extent. Hence, many opt for homoeopathic treatment.

Fibroids usually grow slowly and develop either inside the uterus or on its wall. It can also develop in the cervix area of the uterine cavity. The mass is usually made of fibrous connective tissues and blood vessels. Inflammatory fibroid polyp is a type that develops in the colon. Signs and symptoms vary from one individual to another. The common indication of the presence of a fibroid is as follows:

The exact cause behind the development of uterine fibroids and associated disorders are not known. According to popular scientific hypotheses and research, genetic disposition and hormonal imbalance and their effects are probable causes of fibroid formation. Even growth factors and prenatal hormone exposure are likely causes. Xenoestrogen can cause the growth of fibroids. Risk factors include:

According to scientific research, fibroids are monoclonal tumours. 40 to 50% of them show chromosomal abnormalities. In cases of multiple fibroids unrelated genetic defects have been found. It is also believed that hormones like estrogen and progesterone are also responsible to affect leiomyoma cells. Cytokines, apoptotic and growth factors are also responsible for causing fibroids.

The commonly used diagnostic methods are as follows:

Uterine fibroids are extremely common. By the age of forty, about 20 to 25% of women develop fibroids and associated disorders. Women between 30 and 50 years of age are susceptible. 50% of the time, fibroids is the cause behind women undergoing surgery.

How Homoeopathy Can Prevent Conditions Leading to Surgery?

More than half the population of women undergo hysterectomy because of fibroids. In worse cases, they need to get rid of the entire reproductive system including their uterus. Surgically induced menopause occurs due to the removal of the uterus which in turn gives rise to other hormonal issues and discomfort. In cases of myomectomy, recurrence of fibroids is common.

Proper diagnosis and homoeopathic treatment in the early periods of fibroid development can prevent one from undergoing major surgical procedures.

Homoeopathy medicines tend to balance the hormones, cure fibroids and reduce heavy menstrual bleeding. They are effective and natural, with no side effects and can be used even during pregnancy.

Fibroids are a major cause of hysterectomy (the removal of the uterus). Eliminating the uterus leads to surgically induced menopause. The sudden disruption in the production of hormones will cause symptoms that are more severe, more frequent and last longer compared with symptoms of natural menopause.

Myomectomy is the removal of fibroids by surgery while preserving the uterus but recurrences are often observed.

During the early onset of fibroids, homoeopathy remedies can be effective in shrinking the tumours or preventing them from growing in size. Homoeopathic medication can control the symptoms. They can reduce pain in the pelvic area and give relief from associated complications like constipation, anaemia, iron deficiency etc. Homoeopathic treatment comes without side effects. Natural ingredients are used to make homoeopathic solutions. They also improve bowel function and boosts the immune system in various ways.

More than 50 homoeopathy remedies are available for fibroids. The ones commonly prescribed by specialists are as follows:

The duration of homoeopathic treatment varies from one individual to another. It depends on the size of the fibroids and the severity of the patient’s condition. Homoeopathy may not result in an absolute cure but it can treat the symptoms and provide relief. Milder cases can be cured within weeks or months. It aims to give a holistic treatment.

One should always make sure to consult a specialist before using any homoeopathic medication or product for fibroids. Licensed homoeopathic professionals should be contacted for receiving the correct treatment solution.